The fourth week of our Stay Home, Stay Healthy adventure began with all the kids reconvening at home, from their other parents’ houses. All in all this week has been very busy.

Since we bought our house (almost nine years ago), the kids have not been allowed to have a TV, or video games in their rooms. I’d say this was one of the best parenting decisions I’ve ever made. It ensured they would not become hermits, holed up in their rooms, and forced them to participate in family life. Sometimes, Ayden screaming and insulting his friends via headphones while playing basketball 2K on the Xbox in the living room was terribly annoying… but he was involved in so many conversations that he wouldn’t otherwise have been a part of. It was worth the exchange.

Our kids’ tolerance of the restrictions of the last month is wearing thin. Plus my oldest child came home from college, and simply set up her TV in her room without asking (She’s almost 20 and has been living on her own for the last eight months… what the heck was I going to say?). So, we let the other two kids set up TVs and video games in their rooms, on a trial basis. If we never saw them except to eat… then we were going back to how it was before. We’ve hardly seen Ayden.

Half way through the week, I started debating politics on Facebook. I know better! I was prompted to read the Constitution. I don’t know that I’ve

ever read the entire thing. Very interesting. More limiting on the federal government than I originally thought! It clearly states what tax money is to be used for on the federal level, and now I am more confused than before on how our tax dollars are spent the way they are! If you believe our country should be a socialist country… you have the right to think so. However, I’m unsure how you can claim loyalty to the socialist cause and believe in the authority of the constitution… those cannot co-exist. In the midst of all this, a friend told me about House Bill 5717. The title indicates that the purpose is to minimize gun violence. I’m only about halfway finished reading the bill. Although many of the rules within the potential law are good common sense, I cannot understand how they think these rules will reduce gun violence. I’m frustrated with how the coronavirus situation is being handled, irritated at people for being fear-mongerers and misrepresenting information online, and pissed that my rights regarding gun ownership are about to be squashed.

On a brighter note, I visited with my aunt and grandpa and his Gayle one day in the nice gazebo in their backyard… social distanced

adhered to. Visited with my brother and his Harley, one rainy day. He and I are going to be accountability partners to each other for a writing project. Visited two dear friends that recently brought new babies into the world… SO precious. I cannot wait to hold those cutie patooties. Played tennis with my mom at one of the few courts still open. She’s improving! Enjoyed a semi-social distance birthday get-together for my step-brother-in-law. Visited and walked with my grandma and aunt. And finally finished sorting through my living room. I’ve gone through all of my books, DVDs, remote controls, random cords, photo albums, Xbox and Wii games, and art and office supplies. Who needs 27 highlighters?? How does that even happen? I am getting rid of stuff, it’s intoxicating. I actually have empty shelf space. It’s so beautiful. 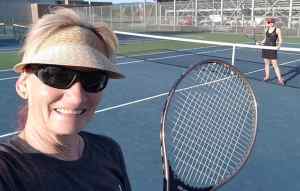 We participated in two birthday parades. The first one was just the girls and I. And it was quite comical. I’m pretty sure the birthday

girl didn’t even know we came by. Getting the dog into Phoenix’s lap in the front seat. Searching for the house. Honking the horn obnoxiously in an unfamiliar neighborhood. Lexi forgetting to hold up the sign. It’s the thought that counts, right? We got a good laugh. The second birthday parade was for a four-year old little boy. There were over 10 cars in line, plus a few motorcycles. The little boy was so excited. Jesse blared a kiddo version of the happy birthday song and I stood up thru the sun roof, holding a sign. The girls were behind us with Abby in the front seat. Who wouldn’t be amused to see a fluffly black doodle dog staring at them from the front seat of a van?

Jesse and I are still busy with work. He calls me his cubby buddy.

I realize that I really miss my friends.

My jaw has been partially locked for the last three weeks. For as long as I can remember, I would have occasional popping in my jaw, or every once in a while, it would lock. Never has it been this bad. Sometimes, I can barely fit a bite of food into my mouth. What a terrible time for this to happen! I will be making an appointment with someone… Oral surgeon, TMJ specialist, SOMEONE as soon as possible. I may need to get braces (I’m almost 40… now, I’ll be dealing with braces and acne… who am I Benjamin Button??), or surgery. Who knows. This is no way to live.

Jesse and I met with Sara and Jason (Ayden’s other parents)… Side note: How funny that both sets of Ayden’s parents have the same initials!! S&J! We’re concerned about Ayden’s mental health, and his attitude is getting out of control. The four of us came up with some clear boundaries and expectations for all the kids. Ayden thinks we’re psycho. Sara and I agreed that we could both be psycho and that Ayden hasn’t seen psycho yet… so he better shape up. We typed up the rules and had the kids initial them.

When we were pre-teens, sometimes my dad would make my best friend and I go to the grocery store with him. I remember being separated from him in the store, and

walking down the aisles, yelling, “DAD!” to find him. So uninhibited. Whenever we’d go on these trips, we’d convince him to buy us strawberry-banana baby food. Well, this week on my grocery-shopping outing, I came across raspberry-banana-peach baby food on sale. How fun to have baby food for dessert! My family was less than thrilled. Phoenix willingly tried an eighth of teaspoon taste, I had to beg Jesse (he decided he didn’t like it before it touched his lips), Lexi jettisoned out of the dining room faster than Speedy Gonzalez, and Ayden ignored me. The next morning however… a second jar of baby food was empty. Pretty sure Ayden ate it. Oh the little things that amuse me. I wonder what amusement Week Five will bring…

We’re ‘toasting’ bananas in Grandma’s front yard to the end of this madness. We’ve all lost our minds