Meet our Pizza Jar. It is more of a mug than a jar, I suppose. I adopted it from my great aunt after she passed away a couple years ago. I 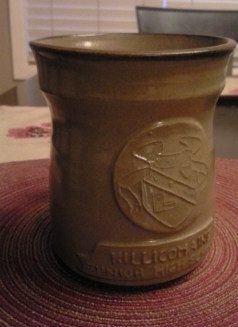 believe it was my great uncle Herman’s from his Killicomaine Junior High days in Holland. It just recently became our Pizza Jar.

Our original plan was to put the names of local pizza places on strips of paper and put them in the jar. Every other Friday, we’d draw a pizzeria and eat there for dinner. As I started to compile the names, I was surprised how many restaurants of all kinds that I hadn’t even heard of in the town that I thought I knew so well! So, alas… our Pizza Jar is really our Restaurants-We’ve-Never-Been-To Jar, but Pizza Jar just sounds so much better!

I’m definitely a foodie. So as my family explores new food and new restaurant destinations, I will share our experiences with you!

Our first stop was MOD Pizza. We aren’t sure, but we think MOD stands for ‘Made On Demand’. You walk into a high-ceiling pizzeria,

bursting with movement. Lots of customers, lots of employees, a fast-moving line, and a menu, perfectly sized for King Kong hanging on the wall (they also had small menus available to browse). It took a minute for us to figure the place out. There are suggested pizzas with names like Maddy and Cooper, and then you can also design your own pizza. And check this out… There are three sizes, three prices… with as many toppings as you want! Whaaaat?? 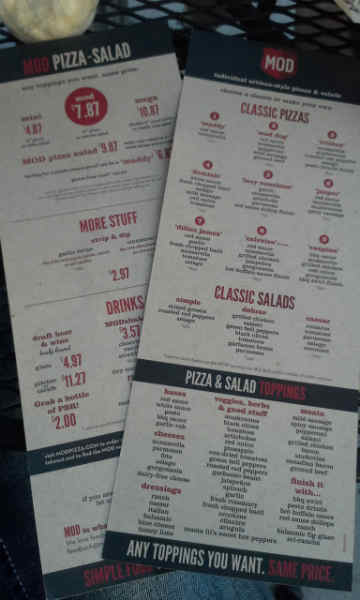 Alexis chose the Maddy… straight up cheese. She got the MOD size which is usually $7.87, but is a little less for the Maddy.

Phoenix got a MOD size pepperoni, sausage, and canadian bacon. The MOD is an 11″ pizza. Apparently my mind didn’t comprehend what 11″ inches is when we were ordering as one of those pizzas would have been plenty for the girls to share. But then again, who doesn’t like left over pizza?!

I got a mini size with asparagus, purple onion, mushroom, cloves of garlic, spinach, mozzarella, and feta cheese… oh my goodness, my mouth is watering! Only $4.87! I am a HUGE fan of veggie pizzas. This pizza was absolutely delish. The crust was crisp, on the thin side. The flavor was fabulous.

Jesse got a Mega Pizza. This is a stack of two 11″ pizzas. Yep… a double decker pizza. He ordered

meat, meat, and more meat… and some cheese and onion thrown in for good measure. Only $10.87!

And as if we needed more food… we also ordered the Garlic Strips with ranch and pesto dipping sauce. Heavenly.

The staff was friendly, fast, and patient (I was slow). The pizzas were thrown together in front of us, and then baked in a giant wood-fire oven. Quick as a bunny our dinner was done.

Not only did they have a great selection of food, but of drink as well! Phoenix had a hand-spun milkshake, Alexis had a bottled soda, I had blood orange San Pellegrino, and Jesse had a beer.

Would I recommend this restaurant: YES! 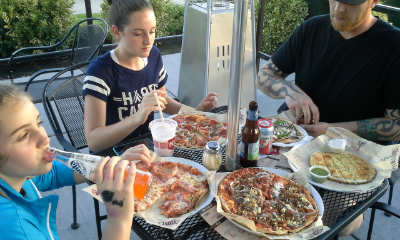 As I was behaving like a tourist that had never been to a pizza parlor, one of the employees asked where I was from. I meekly told him the west side of town (I think he was expecting an out-of-the-country location). He says that there should be a MOD opening up over here soon… I CAN’T WAIT!!

Craving pizza? Head to MOD… you will not be disappointed!

One thought on “MOD Pizza, A+”