TO SAVE OR NOT TO SAVE: My Organic Milk Dilemma

Buying organic is difficult. The difficulty doesn’t lie in the lack of available organic goods. I am from the Pacific Northwest… hasn’t the whole organic push come from my region? I can find organic vegetables, packaged goods, meats, dairy, and snacks at virtually any grocer in the area. I am however a penny-pinching, coupon-clipping, sale-searching mama of three. My husband says cheap… I prefer frugal. Oooh… or thrifty. I like that one. Organic foods are rarely on sale and even more rare is the organic coupon for something that I would actually buy. Just because it’s organic doesn’t mean I’ll buy it. (That statement was directly stolen from Jesse’s wise advise… “Just because it’s on sale, doesn’t mean you have to buy it”. Same concept.)

It is a balancing act between how much I want to spend on groceries and making sure my family eats as healthy as possible.

Flipping through the North County News (the free newspaper that comes once a week), I ran across Chucks Produce’s ad. Apparently, it is Alpenrose Dairy’s 100th anniversary. In honor of this impressive landmark, a gallon of Alpenrose milk is on sale for 100 cents. Limit one. And then the price is $1.49 per gallon after that. Wow, I hear my wallet saying. I am accustomed to paying between $5 and $6 per gallon of organic milk.

Four dollars is obviously not a million dollars. It isn’t going to give me the ability to quit my job and buy a vacation beach house for my family. But, savings add up.

Now, is it worth it to stock up on milk… NON-ORGANIC milk and save some cash? Milk is freezable, by the way. So I could turn this into 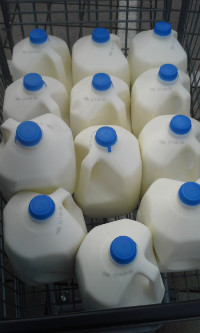 a nice little savings. But again… is it worth it? I could buy four gallons for the price of one. We go through about three gallons every two weeks. I could buy 12 gallons for $17.39. Twelve gallons would normally cost me about $68.28. For all of you math-haters, that’s virtually $51 in savings. Hmmm… that’s nice.

Maria, on Fitnessreloaded.com gives a compelling argument on why she switched from organic to regular milk. My biggest reason for buying organic dairy is to avoid pumping my kids full of growth hormones. Maria touches on this subject. Granted, most of her sources are from the FDA(check out their 2014 findings on milk testing here!), which I question the validity of this organization sometimes, but still interesting stuff. She states that based on her findings, all milk is tested for hormones more than once, and if a batch is ever to be found with higher than the acceptable tolerance levels, it is labeled not-for-human consumption. Well, that’s good. But, I know you are asking the same question as I… what in the world are acceptable tolerance levels for growth hormone in my milk??

In 2014, 3,680,185 samples of milk were analyzed, of which 703 showed positive for drug residue. There were 35,957 samples tested on pasteurized milk products and no samples tested positive. That seems like pretty good odds… I’m visualizing my $51 savings.

Maria mentions that an 8oz steak from a cow treated with the infamous bST hormone has about 5.1 nanograms of estrogen. Compared to 35,000 in a standard birth control pill. I am no scientist, or chemist and have no way of arguing for or against this statement, but it does lead me to believe that I’ll not be spending the extra umpteen dollars on organic steak on the special occasions we have steak for dinner.

Reading THIS interesting article about the use of bST, and the fact that it increases mastitis in cows… I think anyone that loves cows should buy organic. I breastfed my kids, and have a vague memory of the horror of mastitis… I won’t go in to details… I’m just saying, I’d much rather be an organic cow, not getting shot up with artificial growth hormone and avoiding the experience of utterly horrific pain  (pun intended, at the expense of the poor cows. Very distasteful). This particular article also conferred with the idea that cows treated with bST did not produce milk riddled with undesirable drug levels.

Now, Charles Benbrook, former research professor at Washington State University argues that organic milk is indeed better for you than regular milk. His common sense reasoning is that organic cows are fed healthy grass diets which increase the omega-3 found in their milk, while regular cows eat more corn, producing higher levels of omega-6’s which have been linked to heart disease, cancer, and other health issues. He goes on to say that milk is good for you… buy organic if you can, but if not… regular milk is ok too.

Natureworldnews.com had a nice quick read on the subject. They mentioned a study by Journal of Dairy Science that backed up Benbrook in that organic milk is better for us simply because of the diet of the cow, not the fact that the cow is raised organically. But the icing of the cake comes at the end of the article. Buying organic means you know you are avoiding GMO’s. Bingo.

My instinct is the less human-alterations to my food, the better. The more natural my food is grown and produced, the better. I’d rather be safe than sorry. I think I’ll keep paying $5.69 for organic milk. With that being said, my kids have been exposed to GMO’s and non-organic food for most of their lives since we just started buying the good stuff a few years ago… what is a few more months of conventional milk going to hurt? I still may head to Chucks to stock up. Plus, they have Cosmos Creations Puffed Corn on sale… and that stuff is heavenly! 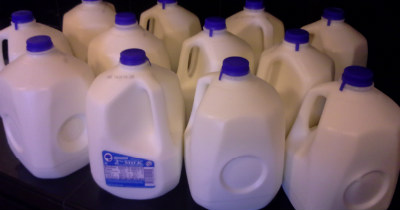