I watched church in my PJs, online. Pastor Danny was up on the stage, talking to an invisible congregation. How odd that must feel to him. But it was good stuff. I think I prefer the online service compared to in-person. Just another example of my anti-social tendencies. He spoke of joy. It was a fitting message… a reminder to focus not on the circumstances around us, but the hope within us. We wrapped up the service with communion. Instead of the traditional cracker and wine (grape juice)… I partook with coconut milk and a veggie stick. I won’t lie, I was a tad tempted to bust out the wine.

Without any complaint, Ayden and Alexis cleaned the bathroom. It was very amusing to listen to them chat and duet the inappropriate songs they had blasting.

I cleaned out the kitchen junk drawers which hadn’t been done for at least 16 months considering the age of the Costco ads I found. Marbles, a BB gun, a full and partial deck of cards, flash lights of all sizes, take-out menus, temporary tattoos, batteries of questionable life, at least $3 in change, and enough pens that I’m convinced we NEVER need to purchase another one again. A Subway gift card with $.42 and a Red Robin gift card with $.86. Hmm.

We took Abby for a walk at the river. It was a gloomy type day, but the crisp air was refreshing. Jesse found the perfect walking stick

which got the wheels turning and next thing I knew, he was collecting sticks to make a bow and arrows. Yes… Jesse… my husband, not Ayden… my son. We got home and he proceeded to saw off random knobs and fix this or that on his collection of river wood. Did I mention that he was doing this in our living room? And he succeeded in making the largest bow I’ve ever seen. He still has some work to do on the arrows, but he did get one to stick in the tree.

Jesse and I watched Where’d You Go Bernadette. It was alright. The book is fantastic. Laugh out loud hilarious. Highly suggest the book. If I had time to reread books… I would reread that one. 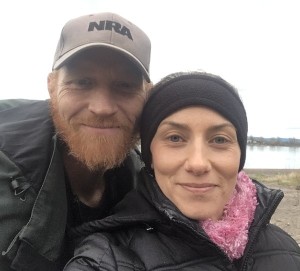 Today was better than yesterday. I made myself a to-do list in the morning. A list I didn’t complete. How is it that I’ve been at my house for the last six days, yet my house is no cleaner than before (except the junk drawers!), I don’t feel like there’s been more family time than normal, I haven’t found more time to exercise. I haven’t spent a greater amount of time reading! I feel like I haven’t seen Jesse or the kids much. And I’ve showered less and visited the grocery store fewer times than usual. How is that possible? Have I gone mad? Am I living in the twilight zone?